More often than not, negative publicity is followed by a down turn, whether that be in revenue or business relationships.

The most recent example that I can think of is the “Donald Trump Vs Toyota” saga. Within five minutes of President-elect Trump tweeting the below, Toyota lost $1.2 billion in value. 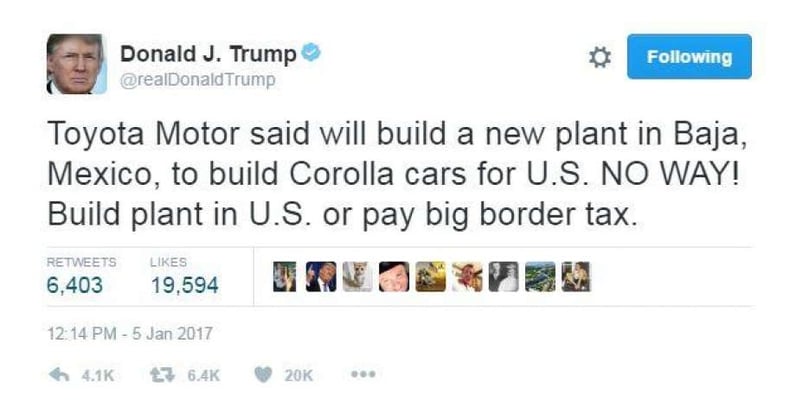 Mr Trump was seemingly responding to comments made by Toyota Motor President Akio Toyoda: at a recent auto industry event, Toyoda commented that the company was still forging ahead with plans to up production in Mexico.

There are isolated incidents where bad publicity can prove to be positive. I am genuinely intrigued by these incidents of negative news being manipulated or often strategically shared to improve a business’s position in a market. The best example I can think of is in regard to budget airlines; I am both fascinated and impressed by the strategy they use.

There are numerous examples I could pull up here, such as budget airlines offering standing only flights to save money and increase capacity. However, I have chosen to focus on a Ryanair announcement from 2011.

In 2011, Michael O’Leary, the airline’s Chief Executive, revealed Ryanair was considering coin slots on cubicle doors: “One thing we have looked at in the past and are looking at again is the possibility of maybe putting a coin slot on the toilet door so that people might actually have to spend a pound to spend a penny in future”.

The above comments were made during an interview on a morning television programme and the announcement was met with huge uproar: it would later be covered by most national newspapers. People just could not believe that an airline was going to charge them to use such a basic facility. Were Ryanair not obligated to provide toilet facilities free of charge? Wasn’t this against consumer rights? How could they be allowed to do this? The public were not happy at all. Surely this backlash would negatively affect the Ryanair brand? Or would it?

It’s now 2017 and Ryanair has never charged a passenger to use their toilet facilities and in truth, they probably never intended to. However, the fact that this comment strategically came directly from the CEO, rather than from a disgruntled ex-employee or whistle-blower, gave the comments merit and the public fair reason to criticise.

I imagine there would have been a small down turn in business in the immediate aftermath, but over the long term, I believe the positives would have far outweighed the negatives. Firstly, the story made national news; this was page 1 material at the time and it got an amazing amount of traction. But it was the subliminal message it sent to the public which fascinated me and the story still appears as powerful today as it did six years ago.

After the dust had settled, what feeling were the public left with? From my own personal experience, Ryanair were at the forefront of my mind when looking to purchase a cheap flight; after all, these were the guys who were going to charge me to use the toilet, so they must be cheap, right? Ryanair’s demographic is not the passengers who turn left, but the cost-conscious consumer and the “spend a pound to spend a penny” PR stunt only cemented their reputation as the most notorious ‘cheap no thrills’ airline. As a consumer, it also lowered my service expectations, so it was a great delight to discover that I wouldn’t be flying in a plane that resembled the aircraft from the opening scene of Indiana Jones! Overall, the flight was no different to any other short haul trip I had made.

I now also feel little to no sympathy for the social media posts from people complaining about how they had to pay excess for an oversized bag etc, because in my mind’s eye I’m thinking, “what do you expect? Ryanair do what they say on the tin – you haven’t paid a premium to fly with Emirates”. This may be a little cold of me but I believe Ryanair’s clever marketing strategy has programmed me to think like this.

Ryanair may not be perfect, but for a budget airline they have achieved the perfect guise by under promising and over delivering.

In truth, there are very few circumstances where negative publicity can be good publicity and 99 out of 100 brands would agree. However, when the publicity is marketed just right using a strategic reputation management campaign, it can be very powerful.

Read a related article below