Bet365 Takes A Gamble With Its Reputation

Bet365, which proclaims itself as 'one of the world's leading online gambling companies', made headlines earlier this month when it refused to pay out a £1 million winning bet.

Negativity online has increased with the news that student Megan McCann will now be suing the company for refusing to honour the bet to the tune of £1,009,960.

Ms McCann staked £24,960 on a dozen horses, winning £985,000 in the process. She was even congratulated when she contacted Bet365 to collect her winnings. After being told the money would be sent across within 48 hours, she later discovered her account had been suspended and closed.

Bet365 claims the teenager was in “flagrant breach” of its terms and conditions because she received the betting stake from a 'third party'.

The top stories shown on Google last week were not favourable towards Bet365: 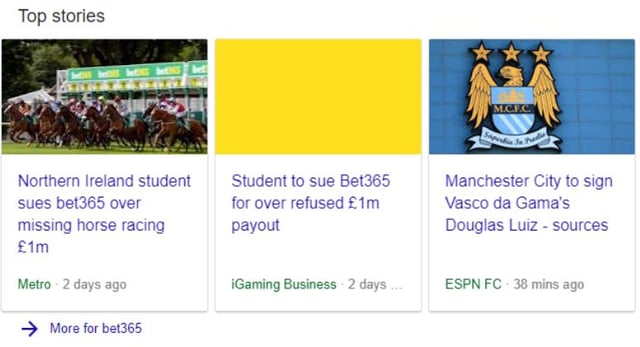 Furthermore, one of the negative news stories found its way on to page one:

One negative news story being shown on page one might not sound like a big deal. However, there were only five organically returned search results on page one, meaning 20% were negative.

According to Google Keyword Planner, the brand term 'Bet365' gets an impressive 20,400,000 searches on average per month. Based on the position of this negative page one search result - and our own research into the click-through rate of the negative link based on its position - 20.8% of page one traffic will now be clicking through to a negative result. That's approximately 3,891,014 people per month!

It's also important to remember that this will be an ongoing news story, with negative articles continually being posted before, during and after the court case.

It just goes to show - the bigger the company, the more damage negative page one search results can do.